is the official name of the white Italian guardian dog that is more commonly known as Maremma Sheepdog. The origins of the breed go back to ancient times, when the dog was an integral part of the social-economic background of the Italian transhumance sheep farming.

A bit of history 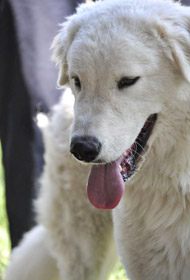 The Maremma Sheepdog was initially bred as a livestock guardian dog. An ancient breed, whose direct descendents are the guardian dogs used nowadays for livestock protection in the Abruzzo region where sheep breeding is still in its prime, as well as the dogs that until recently could be found in the Tuscan Maremma. The transhumance from one region to another gave birth to a natural fusion process, particularly after 1860.

The official Italian breeding associations got interested in these white guardian dogs around 1920. Initially two separate breeds were identified, each one defined by its own race standard and protected by the respective association â€“ the Maremma Sheepdog and the Abruzzo Sheepdog.

After some time though it became quite obvious that there were no real morphological or character trait differences, and hence as of 1st January 1958 ENCI (Ente nazionale Cinofila Italiana) has decided to abolish the separation of the two breeds and to unite them both under the name of Pastore Maremmano Abruzzese, publishing a unified breed standard revised by Prof. Solaro. From that moment on, the one and only official association aimed at the protection and safeguard of the breed is the Circolo del Pastore Maremmano Abruzzese (CPMA). 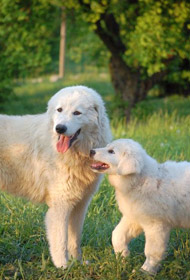 The nature of the Maremma Sheepdog is without doubt a serious and independent one, marked by great courage and a strong sense of duty.

The hard and solitary life led for centuries has triggered the development of these particular character traits. Due to the perfectly conserved innate protection instinct this breed can be used as a guardian dog for livestock as well as for private property.

In particular, it's a special breed; Italian, but paradoxically known only by few in his true essence. An a-typical breed in the galaxy of officially recognized dog breeds. The Maremma Sheepdog was not shaped and developed after the behavior patterns of the humans, nor manipulated by the flatteries of the hearth, but formed by the rules of the shepherding life that evolves much more slowly.

It seems quite natural that a dog following in such a perfect way the rhythms of nature cannot, and maybe even should not necessarily respond immediately and to the point to all the requests of man. The Maremma Sheepdog is not one of those breeds that live in perfect symbiosis with the owner, waiting anxiously and eagerly to fulfill a command.

Not being a "slave" makes him incredibly fascinating to the eyes of his numerous admirers. This dog has retained a kind of primitive wisdom that in lots of cases makes him decide all by himself what's wrong and what's right. 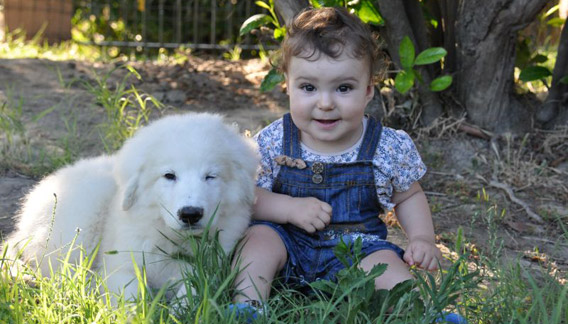 The Maremma Sheepdog is a perfectly even-tempered and reliable dog, the pride of the Italian dog breeding tradition exported all over the world. A truly incredible dog, the fruit of thousands of years of hard work carried out by the shepherds and the breeders alike.

The cultural contest first based on a country dependent on the economy of transhumance sheep breeding, and later a modern Italy with all the attention to animal well being, has created today's Maremma Sheepdog, a fantastic synthesis of beauty, harmony, even temper, reliability and utility.

A dog for many, not for everyone, but without any doubt easy to integrate within a modern family context thanks to his marked quality at being adaptable and reliable. A non-demanding dog, rustic but at the same time tender, independent but at the same time also longing for human affection. An ancient but modern dog, that will have no difficulties to adapt to modern life and that won't need the owner to permanently stay by his side, but on the contrary will expect to be respected and ample space outside where to live being the respectful guardian he's meant to be. 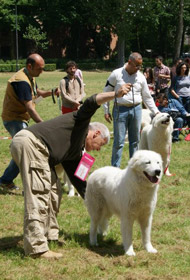 It is always necessary to begin with the premise that "natural" dog breeds, such as the Maremma Sheepdog, were selected for millennia to carry out the task they were meant to do. The character of the Maremma was selected naturally during the periods of the transhumance. All the dogs that did not show enough attachment to the herd got isolated and lost or died during the wanderings. The shepherds always took care to eliminate those dogs that seemed to be not reliable or even worse, aggressive towards the sheep they were meant to guard. Slowly as thousands of years passed by, a breed with a very special character came to life, unique in its outstanding protection instinct paired with dedication and reliability.

A further step was taken by the modern breeders who do fully comprehend and respect the pristine nature of these dogs, and take care to preserve it as is. More often than not it is preferable to opt for those breeders who still have the opportunity to see their dogs working daily with the herd, and can thus confirm the presence of the peculiar and fundamental characteristics, such as the absence of the predatory instinct typical of the breed.

A good breeder will also take care to improve the aesthetics and the health of the dogs in his possession. Always having in mind that the aim shall be a functional beauty (in a "form follows function" way) and basing the breeding program on extended field studies of the characteristics. A serious breeder has the professional and ethical obligation to offer dogs that do fit the race standard, are healthy (scrupulous controls of hereditary diseases) and have all the sanitary requisites fulfilled.

A serious and scrupulous breeder should